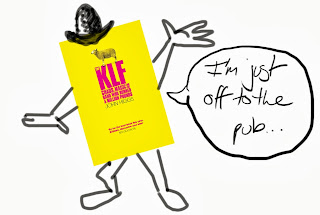 A relationship with a book is very one-sided. You learn from it, it does not learn from you. A book can alter your brain if it so wishes, but you can do nothing to the book. Except throw it at a wall. Even then, it's not that bothered.

Books are also said to 'live on' in the heads of their readers, but again this is a one-sided relationship. Pondering this, I fell into conversation with Shardcore about what my KLF book would actually do, if it could act more like a living thing. I wanted to somehow 'animate' the text through code, in the manner of a more hygienic Doctor Frankenstein, and let it loose online. One of the themes that runs through the book is identifying things that are not alive, but which act like the are, so it seemed fitting.

The answer, we decided, was that if the book was alive it would do what all the kids do: create animated gifs based on what they like and post them on Tumblr in the hope that they go viral. And also babble away on Twitter.


Shardcore then went away and gave the text life. He will blog about what he actually did soon, but basically he created a bot that knows nothing of the world except for the text of my book. From this, it worked out what was important by seeing what was listed in the index, and it attempted to deduce a relationship between those things by analysing their proximity in the text.

And that's it, that's the entire basis of its "thought". We have just switched it on and are watching it, slightly unnerved.

It is now posting animated gifs four times a day (in six hourly intervals starting at 23 minutes past midnight.) It first randomly selects a sentence from the book that is less than 130 characters long. It then tries to work out what that sentence relates to, and skims Google Images for pictures of whatever it thinks is important.

Then it mashes all these up into a seizure-inducing image. You can find them at klfbook.tumblr.com

At some point we will probably see sense and get it to calm down a bit with the flashing images. But at the moment it seems happy going crazy, so who are we to argue? Part of the fun is trying to identify the images it has found as they flash by, and to try and work out why it thinks they are related to the text.

It is particularly keen on pictures of Patrick Troughton and seems to think that almost everything is connected to the number 23. It's working well, in other words.

It is also up and running on Twitter - you can find it @klfbook. It will tweet links to the gifs it creates, and will periodically scan twitter for popular tweets about subjects in the book, and retweet them. If you like the book, it should be worth a follow.

You can also talk to it. Follow it, and ask it a question. It will attempt to answer. It won't make a great deal of sense, obviously, because all it knows is the text from one book, and one book does not a good model of the world make. Much of the time its responses will be gibberish. But occasionally, you may be able to read some sense into them. Occasionally it will be far wiser than it has any right to be. Or more sinister:


@johnhiggs This effect was not just limited to the world in the book.
— klf book (@klfbook) September 23, 2013


Typically, though, it will make no sense at all:


@johnhiggs Moore thought that we each had our own little Baby of Ideaspace, our own home in the mental land.
— klf book (@klfbook) September 23, 2013

What I find disturbing is that, even when it is talking nonsense, it still sounds exactly like me. This is very sobering. On the plus side, if I do loose the plot completely people will assume I've just gone on holiday and left the bot to take over.

What all this is, essentially, is an experiment in apophenia. Apophenia is the process in which people project connections and narratives onto random data. This isn't a bad thing - Humans are apophenia machines, basically - but we can come unstuck when we confuse the patterns we perceive with the objective reality. Robert Anton Wilson and Robert Shea used apophenia in their Illuminatus! novels. They invented the most absurd conspiracies that they could imagine and relied on apophenia to make them appear plausible to their readers. They did this in order to help us recognise how much of our own beliefs are similarly arbitary patterns of our own devising.

Apophenia needs a large data set in order to be really convincing. One single book should not be enough (sorry to break it to you like this, The Pope.) @klfbook, then, is an experiment in seeing how the early sparks of apophenia appear from a small, limited model. For example, the first gif it produced was this:

The quote about Bill Drummond not looking like a pop star is a line from the book, but the bot has chosen to illustrate this with a picture of Doctor Who's first script editor, David Whitaker. And in that context I suddenly realised that, if you saw him in his younger days, Whitaker did actually look like a pop star. That idea, that connection, is now lodged in my head, and it matters not how random the non-sentient code was being when it put the two ideas together.

Please feel free to play around with @klfbook and kick it about a bit to see what it does.

The real paperback book is released on Thursday, Sept 26th, and Amazon are currently offering it with a third off.

UPDATE: Shardcore has now posted on his blog about how @klfbook works, including an interactive data visualisation of how the concepts in the book are related.